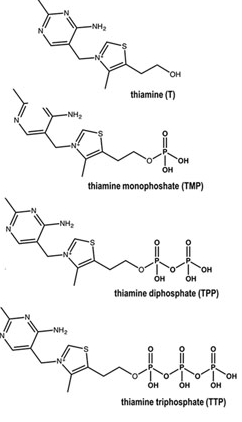 Dietary thiamine is mainly in the form of phosphate derivatives and, before absorption, these are converted to free thiamine by intestinal phosphatases. Mammalians utilize THTR1 and THTR2 to transport thiamine. The THTR1 appears to function in the micromolar range, whereas the THTR-2 appears to function in the nanomolar range. Both transporters are expressed in the human small and large intestine, and the expression of THTR1 is higher than that of THTR2, with THTR1 found at both the apical and basolateral membranes of enterocytes (somewhat higher expression at the latter compared to the former domain). Expression of the THTR2 protein was found to be restricted to the apical membrane domain only [see (5) and references therein]. Free thiamine is converted to TPP by the action of TPK1 in the cytosol and dephosphorylation of TPP to TMP and thiamine by ACPP. At higher concentrations of thiamine, simple passive diffusion takes place [see (6) and references therein]. From blood, thiamine is taken up by either transporter (THTR1 or THTR2). Both carriers are widely distributed in the body, but the levels differ in different tissues. Once inside the target cells, thiamine is phosphorylated to TPP by TPK1 and to TTP by TDPK. Both TPP and TTP can be dephosphorylated by ACPP and THTPA, respectively.

As with most hydrophilic micronutrients, thiamine absorption occurs mainly in the jejunum (33). Throughout the digestive tract, dietary proteins get hydrolyzed, releasing thiamine. In the intestinal lumen, alkaline phosphatases catalyze the hydrolysis of thiamine-phosphorylated derivatives into free thiamine (34). Unphosphorylated, free thiamine at concentrations higher than 1 µM enters the enterocyte by passive diffusion, whereas at lower levels, it is transported via the saturable thiamine/H+ antiport system (thiamine transporter 1 or THTR1) through an energy-dependent process (33). Under conditions of thiamine deficiency, an upregulation of the expression of the thiamine transporter 2 (THTR2) was observed in Caco2 cells in culture, suggesting that diet can modulate the expression of this transporter (35). Within the enterocyte, thiamine is phosphorylated to thiamine pyrophosphate (TPP) by TPK1. Then, most TPP is dephosphorylated to thiamine monophosphate (TMP) to cross the basal membrane of the enterocyte. The TMP is released into the bloodstream through an ATPase-dependent transport system (36) (Figure 1B). Free thiamine can also reach the bloodstream via the thiamine transporter 2 (THTR2) located mainly at the basolateral membrane of the enterocyte. Once in blood, while very low levels of TMP and thiamine circulate free in plasma or serum, more than 90% of the phosphorylated thiamine (in the form of TPP) is present in erythrocytes and leukocytes (37). Notably, the isoform 3 of the carrier SLC44A4 has recently been described as a TPP carrier in the colon. Originally, SLC44A4 was described as a choline transporter linked to the non-neuronal synthesis of choline (38) and required to the efferent innervation of hair cells in the olivocochlear bundle for the maintenance of physiological function of outer hair cells and the protection of hair cells from acoustic injury (39). Recent evidence indicates that this carrier may mediate the absorption of microbiota-generated TPP (especially in infants) and contribute to host thiamine homeostasis (40).

The cellular uptake of thiamine from the bloodstream can be mediated by any of the two high-affinity carriers: THTR1 [encoded by SLC19A2 (41)] and THTR2 [encoded by SLC19A3 (42, 43)]. These transporters are ubiquitously expressed (42–44), but THTR1 is most abundant in the intestine, skeletal muscle, nervous system, and eye followed by the placenta, liver, and kidney, whereas THTR2 is located mostly in adipose tissue, breast tissue, liver, lymphocytes, spleen, gallbladder, placenta, pancreas, and brain (information collected from GeneCards). Once transported intracellularly, free thiamine is rapidly phosphorylated to TPP by thiamine pyrophosphokinase (TPK1). A second kinase, TDPK, adds a phosphate group to TPP to generate thiamine triphosphate (TTP). TPP and TTP can be dephosphorylated to, respectively, TMP and TPP by phosphatases [Prostatic Acid Phosphatase (ACPP) and THTPA, respectively; Figure 1B].

Dietary TPP is hydrolyzed by alkaline phosphatase and converted to free thiamine in the small intestine (22). Free thiamine is absorbed by the intestinal epithelium via thiamine transporters (e.g., THTR-1, THTR-2) and transported to the blood for distribution throughout the body (11). Free thiamine is converted back to TPP and is used for energy metabolism in the TCA cycle.

3. Scientific Opinion of the Panel on Food Additives and Nutrient Sources added to Food (ANS)

After a normal meal, thiamine is mainly in the free form in the intestinal lumen, since its phosphoesters have probably been completely hydrolysed by different phosphatases of the gastrointestinal tract (Rindi and Laforenza, 2000).

The metabolic fate of thiamine was reviewed by the Expert Group on Vitamins and Minerals (EVM, 2002). The EVM stated that prior to absorption phosphorylated forms of thiamine undergo complete hydrolysis involving a number of intestinal phosphatases, and that consequently thiamine found in the intestinal lumen following a meal is in the free form (EVM, 2002; Haas, 1988).